This evening, Our Lord introduced me to one of our more recently admitted residents.  She was a joyful woman whom I had often seen quite close to the Father himself.  After polite introductions, she revealed how eager she was to show me something her family was doing down on earth.

The woman directed my attention to a small church by the name of St. Luke’s.  Apparently, it was at this church that she had spent much of her life, at it was in a building attached to this church that much of her family was gathered.  She happily pointed them out to me and gave me their names.

Including her family, twenty or so young people and adults were busy at work — what work, I couldn’t yet see.  Most of them were in different types of costumes: peasant outfits and saris, a cassock and a collar, excessive amounts of sparkly blue cloth, and a couple of habits that looked quite like my own.  A boy ran around with a plastic knife, meanwhile a tall man in a sweater-vest made a strange, scathing comment about an ice pick (my guide smiled down at him, and it seemed he returned her gesture).  Everyone seemed to be laughing, and there was a distinct sense of anticipation.  Every time a new figure would walk through the door, he was greeted with shouts and “hurry up”s.  It all looked quite amusing.

Finally, everyone broke into little groups and separated into different rooms.  It was then that I noticed signs on each of the doors the groups entered.  The first was labeled “Mother Teresa,” and inside were two girls in saris accompanied by a little boy in rags.  The next room (“Maximilian Kolbe”) was home to barbed wire, a writing desk, and a large statue of the Madonna.  Then came “Maria Gorretti,” a white-swathed room with several young girls and a woman my guide seemed very fond of.  Probably the most interesting sight in the last room was a young boy dressed as Pope John Paul II, playing with an orange plastic gun.

“Do you see her?” my guide pointed out, motioning to the woman from Maria’s room.  “This was her idea.”

And I was right — Saints Alive.

I’ve watched many of these since I’ve come to Heaven, but none were quite like this.  Every child and young person had memorized his or her lines and movements and was prepared to perform them before an audience that night.

I looked around me and saw the eternally living counterparts of those young people down on earth.  Every time the pseudo-Sisters of Charity bent down to pick up their “dying patient,” Mother herself bent down and blessed each one personally.  Father Kolbe shed a joyful tear every time he heard in a gentle voice, “I am a Catholic priest.  Please take me instead, for this man has a wife and children.”  While a pale girl lay on a bed, surrounded by her weeping family, Alessandro clutched his bouquet of lilies a little bit tighter.  And two voices, spanning two universes, breathed the words “Be not afraid” together.

“Oh, but there’s one more,” the woman beside me exclaimed, scolding herself for her forgetfulness.  She then showed me a room right adjacent to the church, in which were two “nuns,” were listening to a “priest” deliver a homily about the Divine Mercy.  “That one’s you,” she said, pointing to one who was holding my diary.

I was overcome with emotion — joy that all of our stories were being retold through the centuries, and gratitude that they were spoken through the mouths of those so young.  I knew all my companions were sending down showers of blessings upon all who performed, narrated, and watched.  But while on earth (and I speak from many years of experience), it’s very easy to overlook blessings.  It’s very easy not to notice them at all.  And I couldn’t stand to let this whole night pass without sending some sort of visible token of our affections.

Then I realized: my diary.  I had every word in it memorized.  Quickly, I recalled a verse which I knew she could not fail to understand and pass on.  She fingered the book, and I guided it to fall open at page 508.

She looked down and read exactly the verse I meant her to: No deed undertaken for God will perish.

Our Lord looked over my shoulder and, smiling, gave his solemn blessing over their work.

Thanking Fran Sohl once again, we took leave of each other for the night. 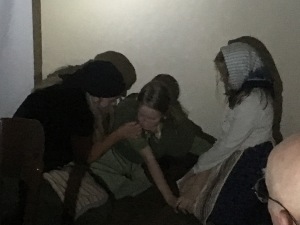