We are pilgrims, not tourists!

That’s what I wanted to express as I shaved and chose the most low-key shirt I brought from home. Yet, the jokes still came, good-natured as they were. Morning prayer with our wonderful contingency began what would become one of the most powerful days in our lives! I chose the old “St. Luke’s Unity in the Community” t-shirt from 1995 when the parish was petitioning the Archdiocese of Louisville to remain open as a viable parish in the region. Those were difficult days for that small Kentucky parish in Okolona, but the unity they encountered was enough to bring about the redemption that has blessed us on this pilgrim journey.

All jokes and hokeyness aside, I speak of unity for a reason as we embark toward Niepekelanow, “The City of the Immaculata”. The great St. Maximilian Kolbe may have never foreseen such powerful witnesses of Divine Mercy come from Poland in the ways that have transpired. During his life’s work, his sole mission was to bring souls to Jesus through the Immaculata, through the Blessed Virgin Mary! So let’s explain that concept 🙂

He compared the moment Our Lady of Lourdes told St. Bernadette, “I am the Immaculate Conception” to the moment God told Moses on Mt. Sinai, “I Am Who Am”. In a way that reflects God’s essence, or in the words of Bishop Robert Barron–just as God is “the sheer act of ‘to be’ itself”, God granted to Mary the essence of immaculateness, the sheer act of purity itself! Because of her acceptance of the Holy Spirit’s unitive power which brought forth the conception of Jesus in her womb–in other words, when she essentially “married” the Holy Spirit in the Divine Betrothel”–she became the spouse of the Holy Spirit. St. Maximilian Kolbe described Him as the “UN-created Immaculate Conception”. Literally, the Holy Spirit proceeds from the Father and Son eternally! The Holy Spirit IS the eternal love between the Father and the Son, and Mary, the sinless creature that she is, became ONE with the Holy Spirit just as a wife becomes ONE with her husband, even to the point where she assumes his last name! It would make sense then that Mary, Queen of the Fiat, would embrace her last name as Mary, the Immaculate Conception!

This is deep stuff everyone, I know, but this man was a deep thinker! If you don’t understand everything I’ve written, join the club! We’re all trying to comprehend the great mystery of Christ’s life, death, and resurrection. St. Maximilian Kolbe seemed to grasp it more than most though, for the things he wrote and taught were from an interior life outside of this world. When we arrived at Niepekelanow, we encountered his entire life’s work brought to its fullness (at least, up to this point anyway!) There wasn’t just a pretty church with a couple of buildings and a gift shop attached to it; there were houses and roads, courtyards, a fully functioning fire station for crying out loud! It is quite entirely a City consecrated to the Blessed Virgin Mary, and through her, we become united to Christ in the Eucharist! There’s more that can be said theologically, but understand that our relationship with Mary is critical to developing our pure intentions and desires because she is the  very ESSENCE of such purity of heart! If we wish to see God as the Beatitudes so eloquently express, then she’s the Mother of Mercy who will help open our eyes fully!

So, as I prayed quietly on my knees in front of the beautiful statue of St. Maximilian Kolbe, Sr. Caryn rushed up to me with the following words: “Sorry to interrupt, but if you don’t come with me now, we’ll lose our seats. You’re gonna die when you see where we are.”

Good thing she interrupted, because within a few minutes, we were quickly walking up the aisle to the very front where they had placed chairs for the heavy number of pilgrims who had filled the place to capacity. We were blessed to sit in the first two seats in the very front row on the left! We were actually the first to receive Holy Communion, and I have to admit, it felt eerily similar to my sacramental moment of receiving my First Holy Communion…at none other than St. Luke Church while it was still being rebuilt from the devestating fire that had brought it to ruin. That’s a story for another day though, for the graces of this powerful moment were awakening something else entirely!

After Mass, we had a wonderful pancake breakfast with some apple-mint juice. Oh, and when I say wonderful, I’m speaking more on the atmosphere. The pancakes were about the size of FOUR pancakes back home so most of us couldn’t even eat it all. Plus, well…I’ll just say the food was adequate and kept us alive until dinnertime! The juice didn’t help, and when Kim dared me to chug the second bottle that Sr. Caryn didn’t want, provided she chugged her’s as well–there was no going back. That’s all I’m gonna say about that 🙂 Ok, I’ll admit it: SHE WON! Now I’m done 🙂

Anyway, from there, we had about 20 minutes to tour the church and progress through the courtyard, and before it was over, the pilgrims had come out in droves. While I sadly attempted to record a short video introduction of Niepekelanow, the entire Indian contingency decided it was not meant to be, for the townsquare became a massive dance party with everyone caught up in the excitement! Yes, this was indeed still a time of incredible celebration and jubilation for our Merciful Father!

Walking through the original buildings that St. Maximilian Kolbe established was mesmerizing. Seeing his first room where he lived and worked, along with his vestments and sacred relics that the Friars still had of him–all became grace-filled encounters of wonder and awe! We sat in the chapel where he used to say Mass! We toured a museum that showed us the intensity of his work with his “Militia Immaculata”, the Knights of the Immaculata! He had always wished to become a soldier in the Polish army, and with his priestly ordination, God granted his wish–even to the point of his martyrdom at the hands of the Nazi regime! A soldier for Christ indeed… 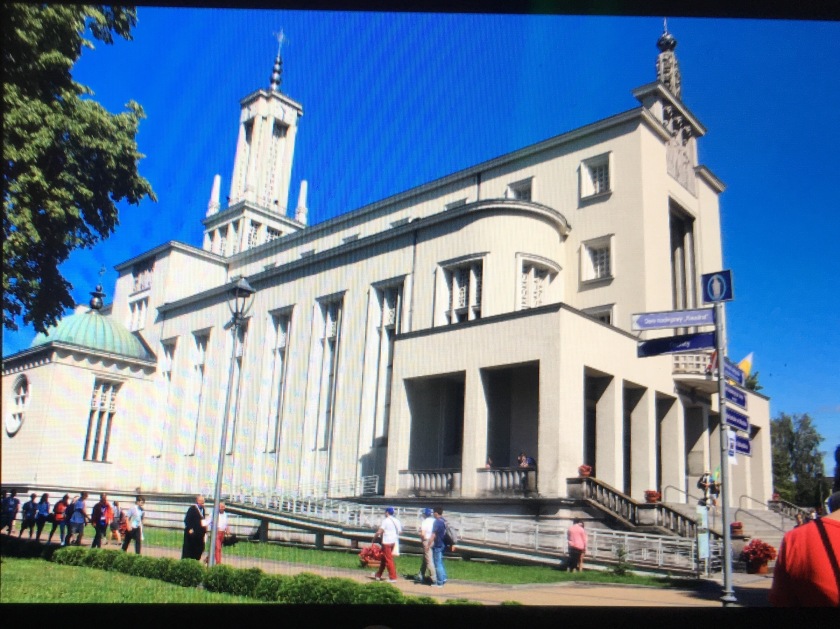