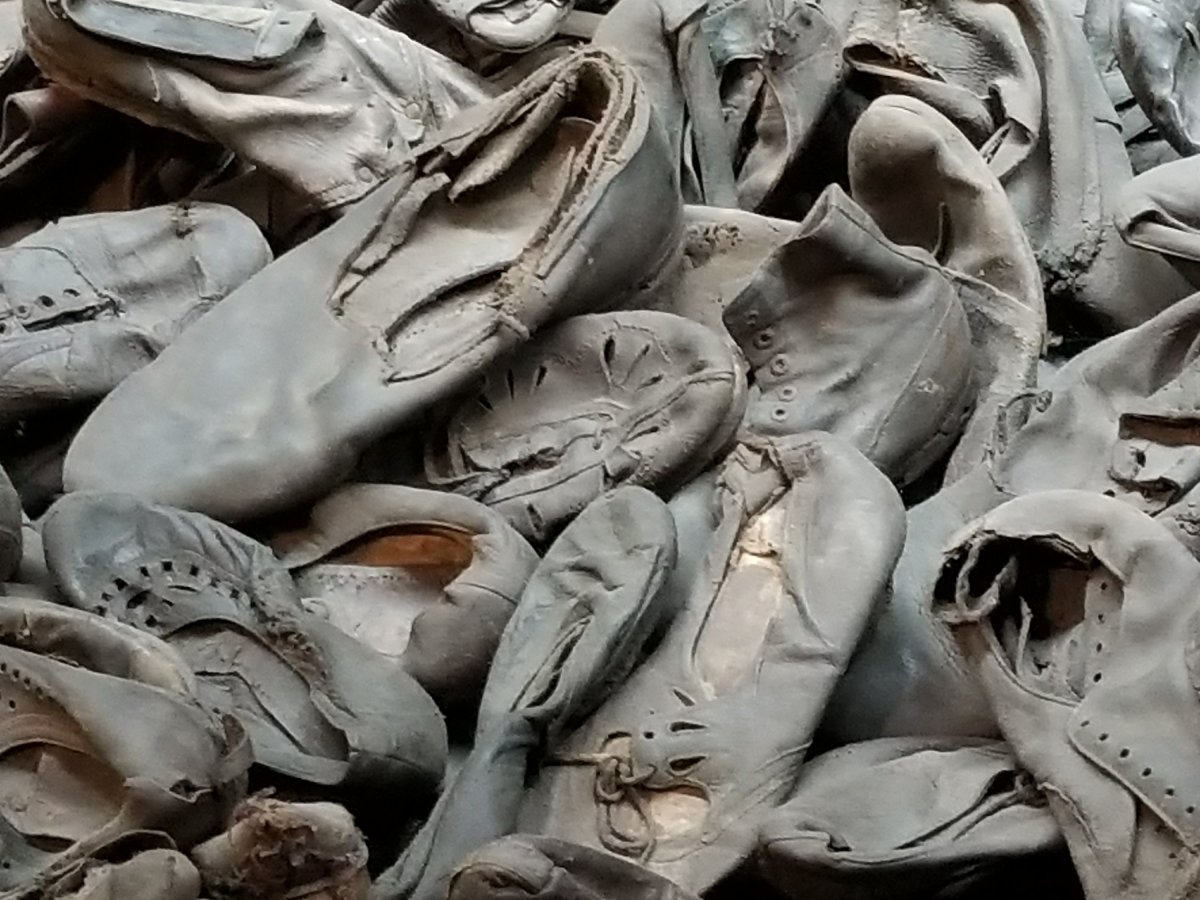 Suddenly, in the midst of my grogginess, I awoke to Mary, Caryn, and Ed’s concerns about our bus’s misfortune. Apparently, a police officer had just pulled us over to inform us that luggage had been flying out of the bus all over the interstate because our side hatchway had opened up unexpectedly. Sadly, “that other guy” (Leo!) hadn’t closed it hard enough and after a few hours of jangling back and forth, the door finally jangled loose and opened up long enough for our cooler full of food, Caryn’s backpack, and poor Jacob Cantrell’s luggage to be violently cast into the darkness.

Driving back the 15 miles wasn’t easy, but with an express Novena in the Memorare and a Glory Be for a successful search (prayed beforehand!), we received the gift of recovering some of the food and Caryn’s bag, though still without recovering Jacob’s luggage.

It was a bittersweet moment, though at the time we didn’t know who’s luggage we had lost, for the only recovered item from that bag was the broken handle that would have wheeled Jacob’s Pokemon t-shirts safely into his hotel room. Oh that boy is a gift, and what an incredible gift he became for us when despite his loss and our worries, he maintained a joyful and open spirit to whatever the Lord had in store for him! Mary and Caryn quickly came to his aid and raced to the nearest store to buy him some new shirts and other clothing items (that’s it’s own hilarious story!) From there, they hiked uphill both ways in the snow to get back before everyone went to sleep after the pizza dinner. And yet, Jacob was patient and unconcerned the whole time! Truly, the gift of detachment I think is what Jacob gave us by the end of Day 2, for that is the only preliminary grace we could require in our own utter abandonment to divine providence.

If we truly wished to live the Will of God, and thus enter into Heaven, then a spirit of total openness and positive detachment was necessary—or our joy could never fully come to us!

So often, we get lost in the complexities of grasping, as if we could ever resolve the deep ache for Infinite Love. Rather, we condition ourselves to hiding, suppressing, or deceiving, which only perpetuates the complexities, thus leading to an infinite ache of constant emptiness. Instead of being filled with the Ultimate Fullness in our docile attitude and eager heart, we let our perceptions and speculation dictate our emotional lives. If we can learn how to channel these passionate desires for beauty, then surely our lives will become more stable and more peaceful.

Arriving in D.C. after a wonderful and much needed breakfast at Cracker Barrel (where Bradley refused to do his 50 pushups as agreed!)—was extraordinarily somber. Fellowship immediately gave way to Solidarity with the Jewish people as we encountered the National Holocaust Museum for the first time in recent memory. Mike Swearingen’s contingency of pilgrims from DeSales (my alma mater) was among the throngs of pilgrims ahead of us streaming into the museum, through the security, up the elevator, and at last within the bowels of historical and yet prophetic symbolism to what has now become the greatest Holocaust in human history: Abortion.

Suddenly, I was emotionally back in college 2011 during my own first experience of the March for Life Pilgrimage as I simultaneously prepared for my first trip overseas and by airplane to the great city of Madrid later that August for World Youth Day. Suddenly, I was staring wide-eyed at the powerful imagery of the empty shoes, and my heart sunk to the very doorway of my inaccessible Eden by which beauty had not yet been fully redeemed, and yet there was a glimpse nonetheless!

Margaret Sanger, through her horrific agenda and eugenic infamy akin to the evils of Adolf Hitler himself, actually provided us with the fuel for creating perhaps the most sustainable and profound culture of life that could have ever existed. While walking through the turtle-paced halls of the Holocaust Museum, we learned a powerful truth. The Nazis burned thousands of books in book burning “ceremonies” during the early years of Hitler’s regime. Among those books were the writings of Albert Einstein, Helen Keller, Karl Marx, Sigmund Freud, and Margaret Sanger herself—and we wondered to ourselves how such destructive voices in the 20th century like Marx, Freud, and Sanger could have been lumped into the poetry, artwork, and intellectual achievements of so many others. How could such an evil as Hitler’s intolerance have possibly not recognized the “comradery” in those other voices of division and relativism? Ah, and that’s where we found the key that would unlock this mystery of America’s deepest issues.

In the very literature of the museum exhibit on the Nazi’s book burning ceremonies was the enshrined reality of our own propaganda’s hold on cultural evils. The following quote comes directly from the plaque at the Holocaust Museum: “Writings by the American women’s rights activist Margaret Sanger were destroyed, as were those by Helen Keller.”

How could such a woman who made it her life’s goal to throw off the “chains” of what many see as the reproductive burden of femininity ever be deemed a champion of women’s rights? How could abortion ever be considered a right for anyone in this world? And yet, through such subtle verbal engineering, the shrine set in our nation’s capital to ensure we never repeat such atrocities has actually enshrined within it the very assumption that would perpetuate something far worse?

Funny that she was placed next to Helen Keller, a woman who due to a childhood sickness lost both her sight and her hearing yet overcame them to become an equally influential feminist in the 20th century. Unfortunately, it is this loss of vision and obstinate refusal to hear or embrace truth that brings about a rejection of Eternal Life itself! God sends none of us to Hell, nor does He make us deaf or blind to the grace it would take to embrace Heaven. Rather, through our free will, we choose for ourselves our eternal destination. We either cut ourselves off from divine providence by attempting to control our destiny, or we open ourselves up to divine providence by embracing God’s control over His destiny for us. Every single one of us has that choice, and perhaps the greatest grace by which we can recognize this reality comes from the silence of those empty shoes and the great potential that so many rejected in the name of “progress.”

Indeed, the Holocaust was a cleansing, but not in the way the Nazi’s envisioned. God instead, through the slow passage of time, awoke within us a great ache for human dignity and a restoration of the human person. St. John Paul the Great’s Theology of the Body was a direct response to this evil rejection of love, and the glory of God that is resulting from this beautiful Gospel lens is manifesting itself in the Pro-Life Generation of today’s American young person. Each of these students, teenagers and young adults alike, are encountering first-hand the effects of birth control’s intolerance and realizing its direct connection to manipulation, fear, and societal devastation. Margaret Sanger was not a woman’s rights activist. She embodied the anti-Fiat in it’s most extreme form, and brought with it human devastation beyond anything this world has ever seen.

Praise God for His providence and sovereignty over human suffering, for this is beyond any one person or group’s ability to untwist or abolish. In fact, for decades, the pro-life movement has come to understand this truth in profound ways—for despite our human efforts, as we have tirelessly worked to compel the world to overturn Roe v. Wade, change our laws, and reform our hearts about contraception and abortion—it has felt unheard and/or purposefully sabotaged by the mainstream media and special interest groups. Yet, we know, based on Salvation History and the depth of our heart’s desires, that we will discover and recover God’s original purpose—but without going back in time. We aren’t asking God for a cure, we are asking diligently for a healing, so that we can thoroughly understand why we have fallen to this terrible lie and given into fear instead of seeing the truth and trusting God’s deliverance!

Mother Mary, come to our Aid! Crush the sabotage of the world’s diabolic mockery and give us your Son’s Divine Life in the Eucharist! And suddenly, we recognize what you did for us that evening. After we left the Holocaust Museum around 1:30pm (waiting on Assumption HS and Ed Harpring to get back to the bus), we made the drive to the most highly anticipated Vigil Mass for Life we’ve ever encountered. In the wake of the sexual abuse scandal, in the midst of this abortion-wounded culture, the Circle of Life with the whole Archdiocese of Louisville experienced the Holy Sacrifice of the Mass with 10,000 other pilgrims at the National Shrine of the Basilica of the Immaculate Conception.

In Christ, for Love & Life!

The Fellowship of the Fiat, ArchLouWYD2019