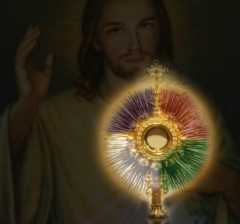 Opening Prayer: Lord Jesus, as we begin these daily reflections on the Silent Key and what it means to adore you properly, we offer up our whole selves as the only appropriate gift to you. Just as you gave your life for us, it seems fitting that our response to your unconditional love should be to allow you to have all of us as well. I ask all the saints in heaven, especially St. Maximilian Kolbe and St. John Paul the Great to pray for me, an unworthy servant of the Eucharist, that I may be able to endure the sacred tasks of this noble endeavor.

Above all, on this Feast of the Queenship of Mary, I ask you Immaculata to dissolve me completely into your womb so that these words may be yours entirely, in a way that my only contribution is perhaps the flavor by which these truths are received, similar to the salt in the ocean. Only, you exemplify what it means to be dissolved in the Ocean of Mercy Mary, and for that—your title as Queen of Heaven and Earth is most fitting. At last, I offer up this initial reflection for the intentions of the Holy Father Pope Francis and for the continued expansion of the Kingdom of Heaven, particularly through the teachings of the Theology of the Body.

We pray all of this to Jesus, through Mary. Amen.

From Joseph Cardinal Ratzinger’s “Spirit of the Liturgy” before he became Pope Benedict XVI, excerpt from page 36-37.

“What, then, is special about the liturgy of Israel? First of all, without doubt, the One to whom it is directed. Other religions frequent direct their worship to subordinate powers. … Adoration is due to God alone: that is the first commandment. Now this one God is worshipped through an extensive sacrificial system, the meticulous regulations for which are set out in the Torah. However, when we look at the cultic history of Israel more closely, we run up against a second characteristic, which leads finally, by its inner logic, to Jesus Christ, to the New Testament…What at first seems to be a break turns out, on closer inspection, to be a real fulfillment, in which all the paths formerly followed converge.” (SL, 36-37)

At the foundation of every relationship is Communication. Without this giving and receiving of one another, it is impossible to know any substantive aspect of a person. Yes, while information can be acquired through other people and through other means, the reciprocal reality of relationship can still come into being only through the willful embrace of two persons. In other words, if you don’t talk to someone, you won’t know who they are!

But it goes a bit deeper doesn’t it? If we only ever talk to someone, we may thoroughly communicate who WE are to the other, but we may still know nothing of the other. This could present a problem if we don’t learn how to LISTEN. Suddenly, it’s not just in the giving or doing that we find relationship, but in the receiving of the gift of the other. What better way to receive than to be silent before the other in both manner and speech? Body language is critical in this because that too communicates whether or not we are invested in understanding what is being communicated from the other. That means—pay attention by looking them in the eyes, calming your movements, asking questions, waiting for them to finish what they’re saying, and then restating what they’ve said to ensure you understand what’s being communicated.

I experienced this in Adoration just last night. After sitting with a particular chapter from Scripture, I started to wonder exactly what God was really trying to say to me. After everyone else had left the room, I got my chance to just sit before the Tabernacle in total silence, in both manner and speech. After a while of reading the Word made Flesh over and over in meditation, I felt the confidence to speak outloud what I felt God was saying to me. Suddenly, the peace of my relationship with Jesus came flooding back in a way I had not felt in a long while. Give it a try sometime, and see what Christ is trying to say to YOU, if only we communicate with Him in prayer in Silent Adoration.

More reflections to come as the Silent Key continues!